Posted on September 1, 2013 by blacksheepradio

This week’s episode is my reporting and commentary from the low-wage worker walk-outs in Wisconsin.

Update Required To Play MediaUpdate your browser to a recent version or update your Flash plugin.
Below I’ll also post the transcript of my commentary, which I’ll try to keep updated…

This episode is my reporting and commentary on the Low-Wage Worker strikes that happened last week, Thursday August 29th. It’s a little bit different from the format of episodes that we’ve done up until now, because its not an interview about one subject exactly but more of an engagement with a movement that’s on the ground. The audio for this episode is from the rally and march for low-wage workers here in Madison, Wisconsin: I interviewed four workers who walked out for Labor Radio on WORT-FM, but I decided there was a lot more to be done with what I had than I could feasibly do for a four minute spot on a community radio station. 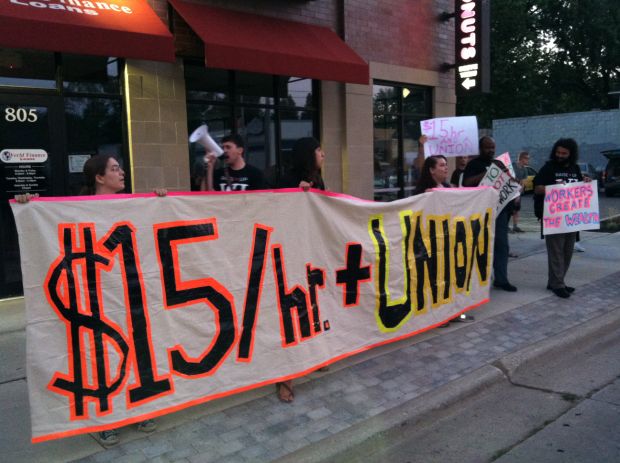 If you haven’t been following it, for the past year there have scattered actions at big retail and fast food chains across the country, mostly in the Midwest and East Coast. About a year ago, there was the “Our Wal-Mart” walk outs on Black Friday, which was sponsored by the United Food and Commercial Workers Union (UFCW), which marked the beginning of the national focus on low-wage workers. There was a little bit of a gap, but in the spring of this year, workers mostly at Fast Food chains like McDonald’s walked out in small numbers in St. Louis, Milwaukee, Chicago, Detroit and New York.

I think people have been paying attention to these for a few reasons. First, a lot of statistics are coming out saying that the only job growth that’s really happened since the Great Recession started have been in low-wage service jobs. So it’s significant because its a movement targeting some of the worst, most alienated jobs in the country and really starting from the bottom of the job market. Second, in terms of organized labor, no one has really successfully organized workers in these industries for decades, and seeing this kind of movement says that maybe something else is up. That’s a larger subject, because we could talk about the attempts by the IWW to organize at Starbucks and Jimmy Johns, or the Steelworkers trying to get into fast food, but whatever your take on that I think we can say it hasn’t been on this scale. The last thing is that these actions are all happening at a time when the rest of the labor movement has been in retreat, with shrinking membership and less confrontational activity—so it does really stand out as something different.

For the last few months I’ve been doing stories and interviews for the local radio station on these actions, mostly talking to people in Milwaukee. The information that’s been released and planned for the media tends to be pretty different than what you find if you ask a few questions and look at the movement: for one, in all the articles I’ve been reading, especially this last week, avoid talking about who’s been putting this together. I’ve called up organizations who put out press releases and asked them, “How did this action happen?” and their answer is almost always, “The workers just did it themselves.” I don’t want to downplay the importance of workers realizing something has to happen, but I think the backing organizations are intentionally avoiding talking about their role and the planning that’s been happening as kind of a PR thing.

What is clear is that these actions have been organized mostly by the Service Employees International Union (SEIU)–they don’t sponsor the events directly, but they doll out money to feeder groups, workers centers, lawyers, and then direct the campaigns like that. Here, the group organizing everything is called “Wisconsin Jobs Now”, which they don’t like to say by name, but I asked and that group is an affiliate of SEIU. I’m not entirely sure if they’re doing this because it’s part of a media strategy to shape the messaging or if it’s to protect themselves, since the UFCW got in some trouble for their role with the Our Wal-Mart workers, but they’re trying to lay low while everything’s happening.

I’m taking the time to say something about that because it will be an important part of how this all develops: SEIU is providing the staff power and funding, and clearly they’ll want to see this turn into new members for their union. What concerns me about that is SEIU’s reputation with the rest of the labor movement: they’re an extremely top-down organization, they’re heavily directed by staff and they’re prone to making a lot of deals with management. Steve Early wrote an excellent book, “The Civil Wars in US Labor”, which probably should have carried the subtitle “The Case Against SEIU”. The book recounts SEIU’s fortified convention in Puerto Rico, where police fought off a teachers’ local that was being raided by SEIU, and in other parts talks about SEIU’s attack on local democracy at Kaiser on the West Coast.

So this complicates things. On the one hand we have to recognize the real movement that’s emerging here, see the way that it is shaping conversations ordinary folks are having about work, life, what they’re owed and what’s possible—at the rally I went to supporters who were in unions talked about how they don’t even get $15 an hour. That’s powerful and I think we should really recognize the good in there. But on the other, we shouldn’t forget that there is a plan and direction coming from an organizational backer, SEIU, and we have enough knowledge of what they do to not just take this on face value. Hal Draper, who wrote a lot on Marxism and Trade Unions, made the point that the character of a union leadership doesn’t change the things socialists should do—you always play a critical role, even if the leadership seems welcoming and friendly.

Anyway, that takes us to what’s been happening more recently. The walk-outs have been getting a lot of press nationally, and a Day of Action was called for August 28th for low wage workers, the 50th anniversary of the March on Washington—news I see says that sixty US cities had actions. I got invited through Facebook to the event here in Madison, but it didn’t say anywhere who was organizing it—I did a few quick searches on Google and couldn’t find anything about who put out the national call to action, which I find curious and frustrating. (Maybe I just missed it…)

I managed to get in touch with some of the people organizing the event from Wisconsin Jobs Now through Facebook, and got the schedule of the day’s events, which I only caught the end of. When I got to the rally in downtown Madison, I spoke to four workers on record and talked with some friends and movement people more informally to find out what was happening. I can’t speak for how events were in other cities, I mostly know about Milwaukee and Madison, but labor events in Madison are usually pretty old and white. The city’s major industries are government, university and hospitals, which were all hammered by Scott Walker in 2011. But participants in this event tended to be a lot younger, people in their 20′s and 30′s rather than 50′s and 60′s, and most of the folks walking out were workers of color. As a younger person, that seemed like a measure of success, but it was clear to me that this was all in its early stages: despite having courageous young folks speak out and lead, the event had a lot of the union past times that seemed out of step to me: Solidarity Forever, for example, is a song that’s an adapted Civil War song, after all.

I think that’s where I’ll end. The audio I put together here are the four interviews I did sewn together—for this kind of thing, I think you really have to hear the voices of workers themselves to get a feel for what’s happening and why.