Posted on September 15, 2013 by blacksheepradio 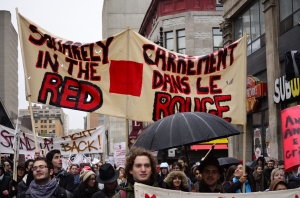 Back in July, I got hooked up with Lazlo Bonin and Frank Lévesque-Nicol when they came through Madison to do a talk for the Democracy Conference. Lazlo and Frank have been touring the Americas talking about the student strike last year and building towards a student conference in May 2014.

The “Maple Spring” student strike was one of the largest mobilizations in North America in the last forty years, and a victory that caught people across the US and Canada where other movements were getting beat at every turn. New Socialist wrote some English language articles about what was happening, one by Alan Sears and another by David Camfield, which I’d recommend folks read over if they want a good short overview. After the “Special Law” was passed to try and stop the protests all over the province of Quebec, “casseroles” marches started semi-spontaneously every night to defeat the law, and someone made this very cool video documenting the marches and setting music to the mood. (“Casseroles” translates to pots and pans in English roughly, because protesters would bang pots and pans as they marched, something that also happened in Argentina in 2001.)

Something I think that’s a little different about this interview is that I spent extra time talking about ASSÉ’s conception of student organizing, their place on the left and how their structure actually works in practice. Lazlo mentioned that the student union has a pretty rigorous democratic process, a kind of Quebecois Robert’s Rules format–in large part because they agree with Jo Freeman’s critique of the Tyranny of Structurelessness.

They also talked about needing to have a broad framework. ASSE is explicitly anti-neoliberal, but they decided to leave the more specific points aside to win greater unity among student militants. Frank summarized their strategic mantra as: “Unite the Left, Rally the Center, Isolate the Right.” There’s a long discussion about the kinds of actions they perform to win trust and legitimacy, which made it possible to have such a historic strike later on.

The interview clocks just over an hour, but I hope that folks find it interesting and get a good “behind the scenes” look at such an important event. Frank and Lazlo pointed me to a few resources to pass on, so be sure to check out the page for the Student Conference in 2014 and ASSE’s long document on what happened in the strike.

Update Required To Play MediaUpdate your browser to a recent version or update your Flash plugin.
Right-click here to download.

This entry was posted in Black Sheep Podcast and tagged canada, quebec, student. Bookmark the permalink.